Just after midnight station 52 was dispatched to the area of Exit 16 west for either a tractor trailer on fire or an accident with the truck over the hill into a creek. Chief 52 got on scene to find a...
➜
Flooding W Chestnut St @ Franklin Farms Rd 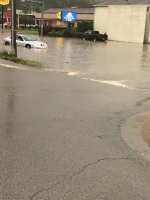 Here is a look at the flooding along W Chestnut St.. Note the car who tried to drive thru but didn't make it.
Accident I-70 Exit 15 Canton Twp.
Sunday 7-1-18 at 4:10pm Canton and N Franklin were dispatched to a reported accident. Chief 52 arrived on scene reporting 2 vehicles 1 with heavy damage and rollover and ejection in the median. 2 peop...
➜
News
structure fire Reese Rd Buffalo Twp.

For the 2nd time in 2 days Taylorstown, Claysville, Canton, N Franklin and S Franklin fire companies were called to a working structure fire. Chief 36-1 was 1st on scene and reported a fully involved structure. Engines from 52 were close behind and reported an exterior attack only. Crews set up a dump tank at the rear of E-52-3 to draft from. Tankers from 36, 31, 52, 43, 32 and 39 shuttled water from near by hydrants.

But the fire had too much of a head start and could not be stopped. 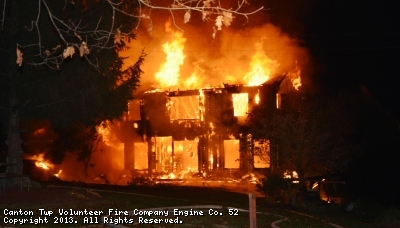 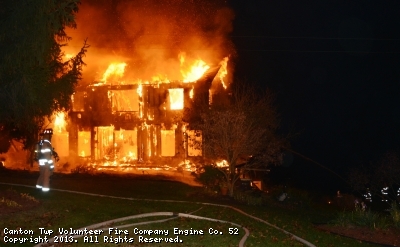 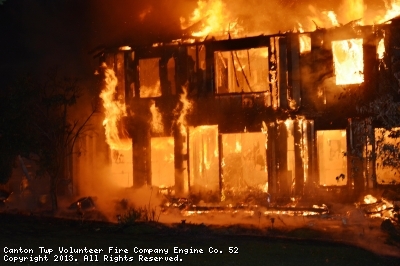 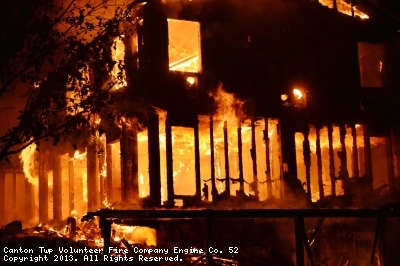 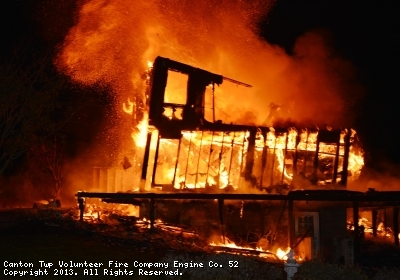 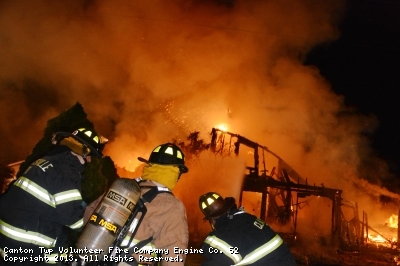 Saturday morning Station 52 dispatched to a reported accident with ejection W Chestnut St at Roosevelt St PSP on scene. Then N Franklin FD is added to the call. Engine 52-2 responds quickly. Then PSP called back and advised this is a possible DOA.
➜
Accident I 70w @ exit 16

Just after midnight station 52 was dispatched to the area of Exit 16 west for either a tractor trailer on fire or an accident with the truck over the hill into a creek. Chief 52 got on scene to find a tractor trailer that went up an embankment into some trees with the driver still inside bleeding fr...
➜
Flooding W Chestnut St @ Franklin Farms Rd

Here is a look at the flooding along W Chestnut St.. Note the car who tried to drive thru but didn't make it.
Accident I-70 Exit 15 Canton Twp.
Sunday 7-1-18 at 4:10pm Canton and N Franklin were dispatched to a reported accident. Chief 52 arrived on scene reporting 2 vehicles 1 with heavy damage and rollover and ejection in the median. 2 people were transported to trauma center in Pittsburgh.
➜
Accident w/ entrapment

Canton was dispatched to W Chestnut st and The Road for a 1 vehicle accident vehicle overturned. Chief 52 arrived on scene to find the vehicle in the lot of The Moose Lodge, vehicle on its side with 1 female still entrapped.
➜
Trailer Fire

Canton Twp along with the City, S Strabane were dispatched to a reported trailer fire with possible entrapment in the Town and Country Park on Brad Av. at 05:00hrs.. Chartiers FD was called to respond with a tanker fire water supply.
➜
Accident w/ Injuries W Chestnut at McKee Rd

Canton and N Franklin Fire Companys were initially sent to an accident w/ injuries and possible entrapment. Then Claysville and Taylorstown Fire Companys were sent since there was the possibility this was on three township borders.
➜
880 GroveAv Structure Fire

Crews from Canton and Washington Fire Depts were sent to a reported structure fire. While enroute S Strabane was requested foe assistance. Washington arrived first to find a small 1 story house with fire through the roof.
➜
Accident w/ minor entrapment
Canton Fire was called out early Tues. afternoon for Chevy Tracker just off the road into some trees reported with entrapment. E52-2 and Res 52 responded to find 1 veh off the road. Driver states he tried to avoid deer and hit a tree instead.
➜
Structure Fire Wayne St

On Tues. night Canton and Washington Fire crews were called to 424 Wayne St in Canton Twp.s west end for a working structure fire. An Engine from Washington arrived 1st with an engine from Canton right after.
➜
Accident w/entrapment at 833 Weirich Av at 3:14am

Canton Twp firefighters were called to 833 Weirich Av. for a reported 1 vehicle flipped over sideways, pinned between 2 other cars. Crews arrive on scene to find this classic vehicle on it's side, in the driveway, wedged between another vehicle and embankment with the driver still in the vehicle...
➜
Accident w/ entrapment @ Bob Evans on Chestnut St

3 people received minor injuries when there car went out of control in then out of the lot then back in and onto it's side in the lot. All 3 occupants climbed out through the windshield after Canton fire fighters cut the glass out and cleared the way.
➜
Franklin Farms Rd Structure Fire

Along with N Franklin crews from Canton, S Strabane, Washington and S Franklin worked together to contain a fire that was unknown to the home owner.
W Chestnut St @ Shady La Canton Twp Vehicle Accident
Fri Morning Canton Fire Co was dispatched for a 1 vehicle accident with injuries possible ejection in a field. Crews arrive to find 1 vehicle the hit the guard rail then rolled over the guard rail and into a pile of woods.
➜
House Fire (November 23,2014)

Station 52, along with 54 & 44, were dispatched to a residential structure fire on Cortez Drive, Canton Township. Chief 52 arrived on scene with a working fire. Crews worked to contain the fire to the kitchen area.
➜
Rope Rescue 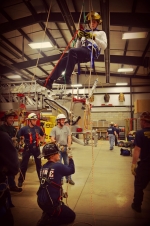 Firefighters from Washington County along with a few City of Pittsburgh firefighters came to Station 52-1 to participate in Rope Rescue training. We held ROPE 1,2,& 3 inside the station which took about 3 months to get all the classes in.
➜
Accident with injuries
We responded to a 2 vehicle accident at the intersection of S Hewitt Av & Smiley Rd. Units arriving on scene find and car on its wheels and a pick up on its side. Canton firefighters deployed there rescue tool but it wasn't needed to free the victim.
➜
structure fire Reese Rd Buffalo Twp.

As crews were on of an accident on Jefferson Av we received a report of a male who fell approx. 30ft out of a tree, stations 36 and 31 were also dispatched cause it was on the boundary of the townships.
➜
Accident w/entrapment

A 2 vehicle accident on W Chestnut at Old National Pike. 1 female had to be extracated from the black car, she was transported to Washington Hosp. with moderatee injuries. The driver of the Lt blue car was found to be under the infulance was arrested by PSP on the spot.
➜
1 of 22 of 2
24 entries in the News
THANK YOU!!!

Thanks to all who donated to our company through our fund drive systems. The members of the Canton Township Volunteer Company truly appreciate it!

This site has been viewed 444,402 times.
Calls
News
Events
Pictures
Apparatus
Maintained by the members and staff of Canton Twp Volunteer Fire Company Engine Co. 52. Designated trademarks and brands are the property of their respective owners. Copyright © 2006-2022. YourFirstDue Inc. All Rights Reserved. Content on this web site is supplied by Canton Twp Volunteer Fire Company Engine Co. 52. YourFirstDue Inc. cannot be held responsible or liable for any content, text, pictures, or any other media found on this web site.
Management login
Powered by